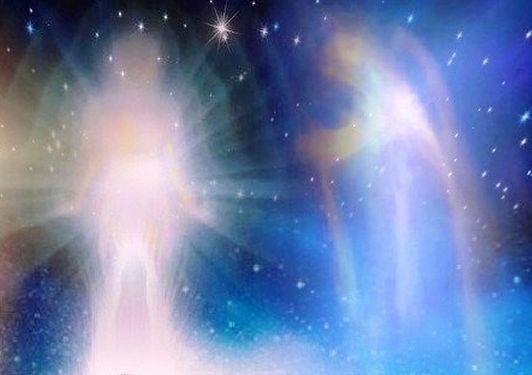 Learning the tasks of being on Transition Teams greatly expanded my knowledge and skills that advanced my ability to serve others. Yet most people would disbelieve this is even possible.  Transition means the process or a period of changing from one state or condition to another. Our souls live past our death and the movement between those states is a transition.

A member of the “Transition Teams” duty is to assist souls forward in their evolution once they have died, and this is done during the seconds of the events which cause them to die. There are many wonderful humans who do this all the time, yet no one would know they do this as it is done in the fields of the unseen.

I was beginning be be aware of my involvement back when I was also running my Day Spa, Ola Massage in Kapaa, Kauai. In the beginning I would need to lay down or go in to meditation so that my etheric body could perform duties on other place in the world; my Higher Self would take an etheric energy  portion of me to where I needed to go. I had many small missions to begin with as I received training.

The work was about helping people to move through their death sequence more easily without the shock of horror that an event can cause. This was a time when the Divine Company, humans and Celestial entities, were (still are) working to keep the movement of consciousness forward to a more benevolent outcome.

Dying in disasters can cause a great trauma and people/souls can get stuck in the astral fields of illusions and not be able to find a way out to their next step in their evolution of their soul.

As the need grew, I was recruited and trained to do this in ‘night classes’, that is while I slept, I would participate and observe the work of other people as etheric beings.

This is not astral projection. This is not using the astral body. That is something very different.

Transition Team work requires more presence thus taking much more substance to perform work. The people that are dying, see us as humans and are eager to be assisted during such great times of stress. It is at this level where they still identify as being human and they respond best to another human face.

When a person reaches a certain level of spiritual development, and that includes high levels of integrity and honesty, their Higher Self (that portion of you that is not in that body of yours, yet connected through your heart and high heart) will expand your skills. Not everyone goes into this training. There are all kinds of needs that are addressed in the realms of our unsee-able reality. Yet spiritual skills are not set into motion for lazy or untrustworthy people.

Once you are trained, you will be sent to areas almost spontaneously to assist souls cross over.

One great man Stylianos Atteshlis did similar work, assisting people in his Etheric portion. He refers this ability to be in two places at once as “Exosomatosis”, which many people refer to as bilocating. 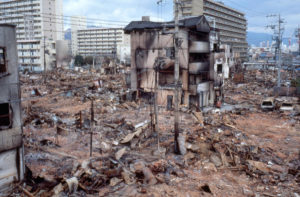 The quake damaged or destroyed 100,000 buildings and caused at least $132 billion worth of damage, or about 2.5 percent of Japan’s national income.

Most that died had building collapsing on them, trapping them to die. More than 35,000 people were pulled from collapsed buildings by neighbors or rescue workers.

Without a warning, I found myself suddenly sleepy beyond my ability to thwart so I called work and told them I was not coming in. I knew something was required of me. Laying down, I quickly went to sleep, and a portion of my etheric body lifted off and went to Japan.

The etheric portion of me stayed in Japan for three days. My home body was limp, I could get up to eat or go to the bathroom but then lay down again. I was so very cold, I had blankets and towels covering me. I lived in Kauai and it was about 83 degree F outside, yet I was shivering. This was because part of me was also in Japan.  I still had to learn how to regulate this.

In Japan, I held out my hand to those in the dying sequences and showed them a calm exit. Many times, I talked to assure them in some way, to return them to becoming calmer. Many saw their body stuck and dead under debris as we left.

We all worked quickly before a person would go in to mourning. I do not know how many of us were on this specific task, yet it was arranged so perfectly so that we could address all the people needing to cross over.

I am humbled to think about how magical it all seems, that there is consciousness to be able to see the entire view of what is happening, calling in the souls who have trained to do this, and to have great success on getting people to move to the higher realms with minimal effort.

The Oklahoma City bombing occurred on April 19, 1995, and was a domestic terrorist truck bombing on the Alfred P. Murrah Federal Building in Oklahoma City by an ex-Army soldier and security guard named Timothy McVeigh. 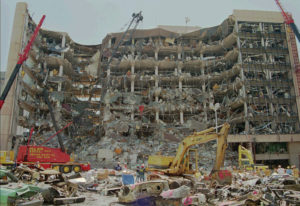 The bomb killed at least 168 people, 19 of those were children, and injured more than 680 others.

The blast destroyed one-third of the building and destroyed or damaged 324 other buildings within a 16-block radius, shattered glass in 258 nearby buildings.

Again my body gave me the sense that I needed to lay down and now. I did not know why. I was not going to work that day, so I laid down. My Etheric other stayed the entire day.  It was very sad though and I cried when I got back.

To serve children was sad. All of them were in a state of shock and so it was not easy to assist. Bombs can shatter a person’s energy field, and healing was needed to be done to repair energy fields first, so the transition would take them to their next step. The whole time was heavy and sad. I was a mess the next day.

Moving on as Others Take the Role

About 2010, I stopped working on the Transition Teams and had spent the year before training new spiritually evolved people to do the work. It was time for me to do something different. So many capable people are still performing this sacred duty even today.

It is one of many spiritual jobs people do daily, hourly throughout the world. Some work with Earth grids and timelines, others with etheric blueprints, many create important portals and the list is long. Some things are too hard to describe to people as it stretches the imagination…just as this does.

Spiritually evolved people do it for many reasons, not all situations have to be big events, most are small and individual assists. It is in this time period that is unique as to assist Earth in her evolution, we must change the emotional nature of humanity, and keep the astral fields clear as they collapse.

Shifting humanity is a full time focus that thousands of people actively contribute to. I am grateful to all of those who do and grateful that I may do my part.