Early one morning, my toddler son and I were making toast in a toaster oven. He was eagerly standing on a chair to see, learn and experience “toast”. I talked him through it, showing him the bread, placing it on the rack, and turning on the toaster oven.

As mothers sometimes do, I told my son not to touch the oven or rack as it is now getting ‘hot’. This was a word I used many times to him. I pointed at the glowing red coils inside the oven which are heating up, telling him it was now very hot. He was fascinated. We had butter and raspberry jelly waiting for the golden bread.

I told him not to touch the oven, and then I stepped out of the room, tossed the wash in to the dryer and returned fast so as not to burn the toast. I came too late. 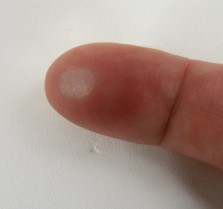 What I saw when I turned the corner was my son, still standing on his chair, holding his pointer finger up in the air… he had burned it.

He had opened the door and touches the rack the toast was laying on, burned his finger. He looked at me with open eyes.

All I could do is tell him that he “burned his finger”, giving terms and logic to his new situation.

I carefully dressed his wound with lavender essential oil and put a bandage on it. We then enjoyed toast slathered with melted butter and smushed raspberries. He did not shed a tear or show much emotion about his learning experience. He had gone where I wished he had not. Perhaps if I stayed there he would not have done it, yet….. would he have learned as much?

So many times we walk in to situations where we must fully experience all that we can in order to get all the information we need to move forward. It does not matter who said what warning; a person will do as they need to. This is the nature of learning.

After something has happened, especially with children, this is the time for sharing the truth about what is going on. It is time to explain in clear adult words. It is a time to be kind and have the child talk about the experience. What children receive out of something gone a bit wrong is very valuable. It is how we all learn, naturally.

It is when a parent overreacts, whimpers or cries, or screams at the child that they needed to listen when all things go very wrong already, that the parent has lost control. they are only in their own ego and fears, and not really WITH their child and the experiencing going on.

Parents are not there to make things worse. We are not there to mimic what the child might feel. Not a time for ‘baby-talk”. We are to be the rock of understanding and help the child put this experience in to a logical order for their own Life Library. Situations build upon each other. No two situations are alike.

My son was not crying when I saw his finger. He was looking at it like a scientist. Inside I was chastising myself for leaving him alone, but on the outside, I was kind and clear with him. Yes, the rack he touched was very hot. It is an oven. Ovens cook things. We do not cook our fingers. Your finger needs some help but it will be fine as it knows how to heal itself.

I showed him the oven mitt I use to move the hot tray so fingers would not get burned. Teach him all that he needs if he were to do this when no one was around, yet also telling him he needs someone around as he is young and might need help.

For in my mind I was thinking, he might just try to cook something when I least expect it, I must show him how it is done. He never really did, instead he trusted me to show him how to do things, following me with curiosity. The key word here is “trust”.

Because I did not yell at him, but taught him in that moment, he felt safe to learn more with me, instead of behind my back like many children do after their parents get scary. He even wanted to wash dishes (Oh Yea!) to see what that was about, just once. (shucks!)

I thought back to when my cousin, about four years old, was wanting to string popcorn with his older siblings and me. He kept reaching out for the needle and thread, but his mother was hovering over us telling him, “NO”.

When she left the room, I handed him my needle and thread, and showed him how with his holding his hands and making the threading movements and angles.

He pushed the needle through the popcorn and right to his hand and poked it. He tried again and poked his hand with the needle.

He looked at me and handed me the needle and thread, contently handing me popcorn one at a time. It just took twice for him to know he would not be doing this. He had not punctured his skin, just felt the sharpness. He now knew why his mother was telling him no. He had more information for his growing curiosity. I gave him the safe space to learn his own way.

If his mother was in the room, she would have instilled fear and anger, yelling at him. She would have made him angry by insisting he was too young to try. I allowed his experience. And he watched me and my eyes as he was trying it. He was fearful that I would yell at him. He was used to yelling as communication.

I showed kindness by gently guiding his aim of the needle so perhaps he could succeed. He came the same conclusion as his mother, no, he is not ready. He still needs to learn more hand control. This was valuable to him and satisfied his hunger for learning. His parents were ‘screamers and naysayers’ about most everything. They taught me how that approach has many negative outcomes. Yet in this moment, perhaps he also bridged the reason ‘why’ his parents yelled, that they did know what they were talking about.

Generations of teaching through example was the way for indigenous peoples. They had children watch and learn. Few words were even spoken as the child knew from the beginning that it was all in watching, catching the details and movements, sequence of things and how to treat items.

When did this style of teaching change in to the constant yelling and hitting of children, “don’t, no, I told you”, and other very hateful actions? When did we also chop knowledge in to segments for the day and leave out the full sequences so that it never makes sense for some time?

Parents are the first teachers and when a child gets one too many screams, they develop differently. They become scared to include parents in their life. They try very edgy stuff out of spite. They try to shield themselves from the hate and anger the parents show when all the children wanted was to understand and know how to deal with something in the future.

Children can react to the yelling and hitting in many different ways. Some just let it go, as they see that is what their parents do. Some will resent it, as it is a message that tells them they are incompetent. Some children will shrink and feel bad, like they are bad, something that over time is very hard to overcome. Some will become defiant and start doing things behind their parents hovering watch. Most children feel badly in many ways to hear their much-loved parents tone telling them they did wrong.

Children want to please their parents, naturally, until a point where the parents made it too difficult for them to be pleased. Then the children feel alone and unsafe.

Just the opposite of what some parents think they are doing bu making things safe; if the parent always disapproves and does not guide with words or showing, then a child’s world becomes very unsafe for them. Growing in to an adult with only a child’s level of learning, makes for a dangerous life.

Kindness and guiding, choosing clear words to build knowledge, while also listening to the child tell their experience is the parenting way, or like I love to call it, we are tour guides. We show them the ways of our world so one day they can go it alone and in a wise way.

As I carefully watched my son eating his yummy toast, I could see he was content. He now had knowledge and was comfortable with his finger. I knew he learned more vocabulary which will help us both in the future. And he now knows how to make our golden toast! I learned much that day, about myself and my son.

Parenting is an on-the-job training. Love, compassion, kindness and a steady mind can take the whole family far, instilling confidence that was learned naturally.