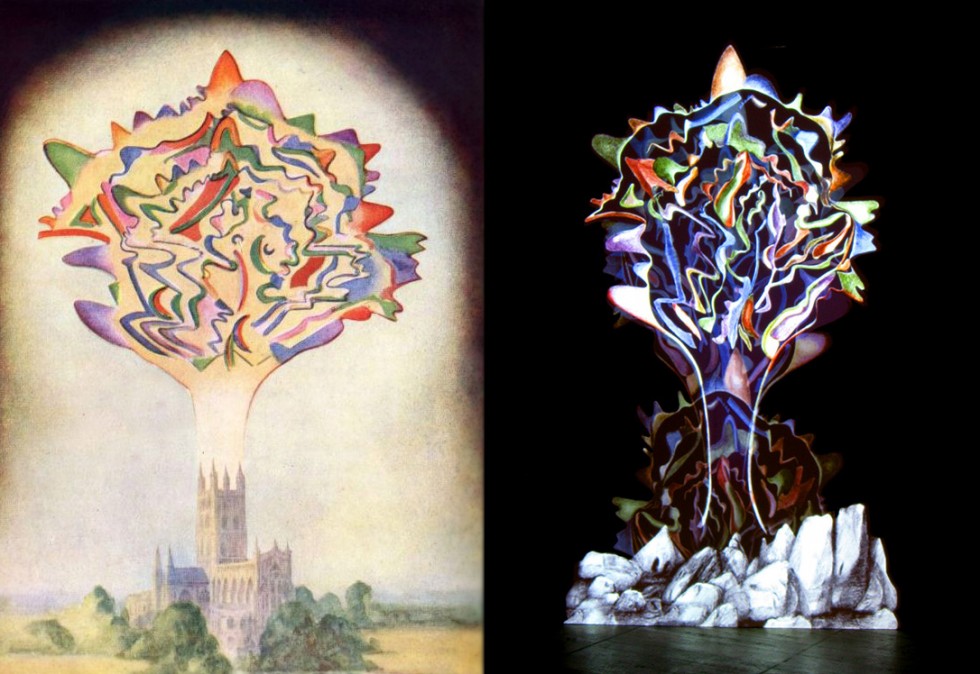 It is true that what we think can become reality and things. It is the basis for why affirmations can work, for it places a positive direction on a thought. On becoming awakened, an aspirant needs to control their mind and the quality of their thoughts. For as simple as a thought can be, the more repetition it gets, the more energy is placed in making it so. ~ Carolyn Thompson

“A thought-form is the result of two types of energy: That emanating in the first instance from the Ego (Soul) on abstract levels. That originating in a secondary sense from the man on the physical plane through the medium of the brain.” (A Treatise on Cosmic Fire, p. 958)

“The average man is often the victim of his own thought forms.  He constructs them, but is neither strong enough to send them out to do their work, nor wise enough to dissipate them when required.  This has brought about the thick swirling fog of half-formed, semi-vitalized forms in which eighty five percent of the human race is surrounded.”(A Treatise on Cosmic Fire, p. 956)

“They are consequently surrounded by a dense cloud of half-formed disintegrating thought-forms and clouds of partially energized matter in process of dissolution.

This produces occultly a condition similar to the decay of a physical form, and is equally unpleasant and unwholesome. It accounts for much of the diseased condition of the human family at this time.” (A Treatise on Cosmic Fire, p. 975)

“Much that is to be seen now of a distressing nature in the world can be directly traced to the wrong manipulation of mental matter by man. …
The selfishness, the sordid motives, the prompt response to evil impulses for which the human race has been distinguished, has brought about a condition of affairs unparalleled in the system. A gigantic thought-form hovers over the entire human family, built by men everywhere during the ages, energized by the insane desires and evil inclinations of all that is worst in man’s nature, and kept alive by the promptings of his lower desires. This thought-form has to be broken up and dissipated by man himself.” (A Treatise on Cosmic Fire, p. 947/8)

“Man is constructing thought-forms all the time, and is following unconsciously the same method as his Ego pursues in building his bodies, as the Logos follows in building his system, and as a planetary Logos uses in constructing His scheme.A man speaks, and a very diversified mantram is the result.

The energy thus generated swings into activity a multitude of little lives which proceed to build a form for his thought; they pursue analogous stages to those just outlined. At this time, man sets up these mantric vibrations unconsciously, and in ignorance of the laws of sound and of their effect. The occult work that he is carrying on is thus unknown to him. Later he will speak less, know more, and construct more accurate forms, which will produce powerful effects on physical levels.” (A Treatise on Cosmic Fire, p. 786)

“In all thought building . . . men have several things to do, which might be enumerated as follows: . . . To purify their lower desires, so that they are enabled to see clearly in the occult sense. . . .An ability to lose sight of self-interest in group-interest, and thus co-operate with the plan. . . . To secure control over the mind . . . An ability, gradually developed once the mind is brought under control through concentration, to mediate in the occult sense, and thus bring through the plan from higher levels, (and) ascertain his individual share in the plan. . . . Finally, having constructed a thought-form, the next thing the servant of humanity has to learn is how to send it on its mission . . . The average man is often the victim of his own thought-forms. He constructs them, but is neither strong enough to send them out to do their work, nor wise enough to dissipate them when required.” (A Treatise on Cosmic Fire, p. 955/6)

“There is no life so circumscribed and no person so situated who cannot begin to work intelligently and to build thought-forms under law and with understanding. There is no day in any man’s life, particularly if he is an aspirant or a disciple, when a man cannot work in mental matter, control his use of thought, watch the effect of his mental processes on those he contacts, and so handle his . . .mind stuff . . . that he becomes more and more useful.” (A Treatise on White Magic, p. 280)

“A thought-form can also act as a poisoning agent, and poison all the springs of life. . . A violent dislike, a gnawing worry, a jealousy, a constant anxiety, and a longing for something or someone, may act so potently as an irritant or poison that the entire life is spoilt, and service is rendered futile.

The entire life is embittered and devitalized by the embodied worry, hatred and desire. All relationships with other people are rendered equally futile or even definitely harmful, for the worried or suspicious aspirant spoils the home circle or his group of friends, by his inner poisonous attitude, governed by an idea. His relation to his own soul and the strength of the contact with the world of spiritual ideas is at a standstill, for he cannot progress onward, and is held back by the poison in his mental system. His vision becomes distorted, his nature corroded, and all his relationships impeded by the wearing, nagging thoughts which he himself embodies in form and which have a life so powerful that they can poison him.” (A Treatise on White Magic, p. 489)

Take time to reread these if you wish to understand the deep unseen reality of the outcome of our thoughts. It is part of what we need to shift here in order to bring in new and positive realities at this time.

Our media keeps our minds so busy with the ugly business of others and thus we co-create the ugliness by our focus and thoughts about it.

This is a major part of an enlightened person, and awake and aware person as they are now producing positive and pleasant thoughts, thus co-creating the new world.

A new lifestyle, peace and harmony is not going to happen without our input. Avoid the negative thoughts as much as possible and course correct them when they seem to be out of hand. Reality responds to all of us as we are creators! ~ Carolyn Thompson

Thought Forms by Annie Besant and CW Leadbeater (the book)