Spirit Abuse or What? By Carolyn Thompson 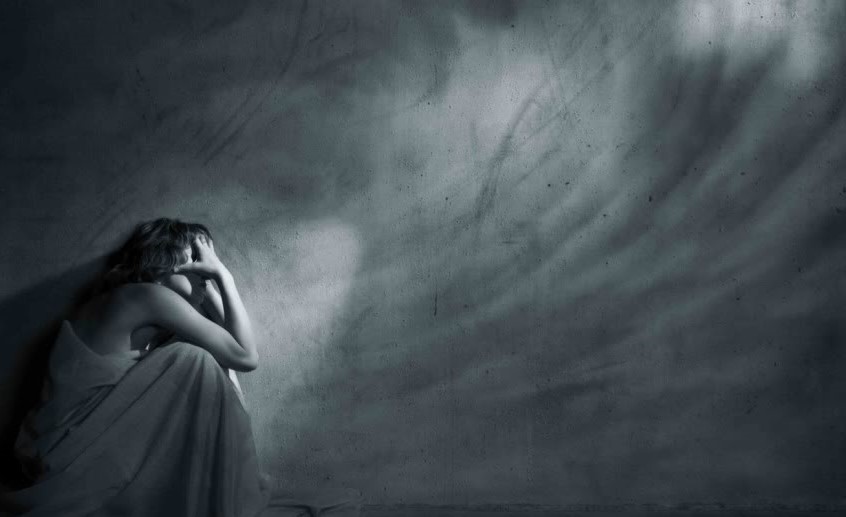 Late in the day at my business, a couple walked in for an appointment for the wife. She had arranged for an energy medicine session.  Yet she also wanted to understand the spirit in her house and why he was there. I had her lay on my table to relax while her husband of 20 years sat in a chair next to us.

They lived high on a cliff in neighboring town; a town in which everyone knew everybody. They all grew up together and stayed connected, active, and harmonious.

I will call her Luna (as her eyes were like the moon, large round and deep). I asked her questions, Was there anything that concerns her?

Yes, Luna wanted to know about this spirit in her house. I asked more questions to help them express what was going on and what was concerning them.

I wanted to know as much as they knew to this point.

Certain kinds of spirits/entities are not allowed to enter my healing room and this one we were investigating could not cross the barrier to be with us. That alone told me this was an uneducated type of entity, perhaps menacing. I could feel him going far away from us. I liked that.

The husband talked first, saying he felt this spirit come to them about five years ago. It was abrupt and went right for his wife. His wife went in to a different personally at times, being angry and extra sassy. Normally his wife would try to make fun of most anything, which was why he loved her so much. She was joyful and had a positive attitude about most anything. But when that spirit first came, he was mean and nasty, even seemed to cause his wife to be more messy and leave things dirty.

He said most of the time this entity would be on their back porch, and at times would move things a bit, not a whole lot, just that a flower pot would be about five inches from where it was before, leaving that dirt circle as evidence. Other times he noticed that no birds would come when he was around.

He said where they lived, they were in a forest with birds singing most of the time, not in the heat of the day, but all other times. When he noticed it being too quiet, he would look for signs of this entity.

Luna chimed in and said “he” makes her sad inside. That this spirit moves into her body and she feels sad, and she can feel the entity becoming mad at stupid things, like a window being opened or even the dress she choose to wear that day.

I asked her how this spirit move into her. Luna said he always comes through her back, and it is jarring, like almost pushing her over. He hurts her at time. 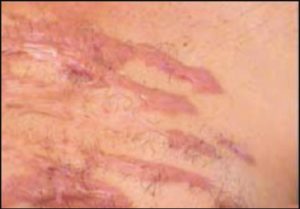 It was then that she pulled her shirt down in the front to show the scars this entity had created. There on her upper chest were several rows of hypertrophic scars. These are where the skin is raised and rough looking scars. She had about six of these at least five inches long, in somewhat of a bundle.

I was speechless. This was the first time I had seen this type of scarring that comes from some unseen entity. I struggled for the next question while keeping a calm expression.

Did this hurt when he did these? Where they all at once or at different times?

Surprisingly, Luna said they did not hurt, even when they appeared. They came one at a time and she felt like they were caused when he got incredibly angry. She again said that ‘he’ operates separately from her even while he is inside her body. She observes his behavior next to her own. He could almost overtake her actions, and so she said she just did not struggle with him at first.

Her loving husband chimed in, said that soon after they figured out his behavior and found a way around this entity. After the first two years they figured it out. But up until then, he was ready to divorce his wife and move far away.  He had heard women go through menopause and can act crazy, but he said this was not like that, it was just plain scary as she was not at all like herself. When the entity was in control, he would throw things at people, just to throw them. No provocation was needed.

Then came a time when they were alone as the spirit seemed to take a vacation for a few weeks, they had a heart to heart talk and she was able to tell him all about how it looked to her from the inside of her body.

Many times they talked to this entity about this or that and calmed him down. He was now able to be more stable with them and not cause harm. He was not giving scars to Luna nor throwing things. He still liked to move things when he was his ‘unseen’ self… as it drew attention to him.

At this point I asked, do you wish for me to remove this spirit from your lives? We can move him forward and let you two have your space back.

No, they did not. They wanted him.

I was not ready for that answer! Looking again at the raised scars on her chest, thinking how this beautiful petite woman was flawless in all other ways, and she was wanting to keep a possibly dangerous entity. Yet, sessions are never about me. It is always about the client and their wishes.

At this point, I smiled and asked them both to relax and I proceeded to go into our Energy Medicine session. I intentionally left the connections to this entity as they had requested. They left with a content look on their faces.

Sometimes people just need to tell someone about their experiences and get the acknowledgement they need for their journey. This was the case here.

There was so much more to this story, and it includes other people in their town too. This entity was something in their lives now and removing it, might leave a hole. They had created a relationship with him.

And yes, he felt like a male about early 20’s and of their ethnicity. I could say more of what I could “see” about his life before he died, but it is not needed at this time. After much thought, I pushed this case study into a place of rest, figuring out that perhaps this entity was now like a son to them.

He was earthbound through his confusion of his own death, and in these situations, I nearly always assist them in to moving out of that stuck state and into their next step. Not this time. He is learning even without a body and seems to have a family. I never heard from them again.

Copyright © 2013 – 2021 by Carolyn Thompson and Enigmatic Proprietary.  All rights reserved.