Pears are a member of the rose family of plants (Rosaceae), which contains a long list of fruits including apples, apricots, cherries, chokeberry, crabapples, loquats, peaches, plums, quinces, raspberries, serviceberries, and strawberries as well as the tree nut, almonds.

The many different varieties of pears commonly found in U.S. groceries all belong to the same category known as European Pear (Pyrus communis). These pears typically have a rounded body that tapers into a neck of various lengths. 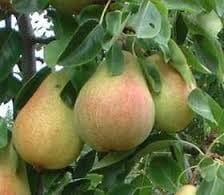 Pears are a juicy, sweet, and easily digested fruit that are rich in vitamins and alkaline minerals such as vitamins A, C, E, folic acid, niacin, copper, and boron.

Pears are an anti-inflammatory food making them perfect for those who suffer from autoimmune disorders such as Chronic Fatigue Syndrome, Epstein-Barr, Rheumatoid Arthritis, Endometriosis, Guillain-Barre syndrome, Lyme disease, Hashimoto’s, Meniere’s disease, and Colitis. 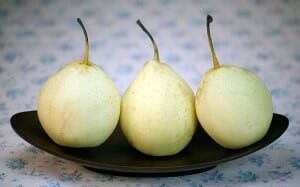 Pears also help to decrease the risk of Heart Disease and Type 2 Diabetes. The flavonols in pears coupled with the anthocyanins help improve insulin sensitivity and their low glycemic index make it a perfect food for those who have blood sugar issues.

Pears contain a special fiber that binds with bile acids in the intestines which has the ability to lower cholesterol.

Pears also contain both Glutathione which can help prevent high blood pressure and strokes and Boron which helps the body retain calcium and prevent osteoporosis. 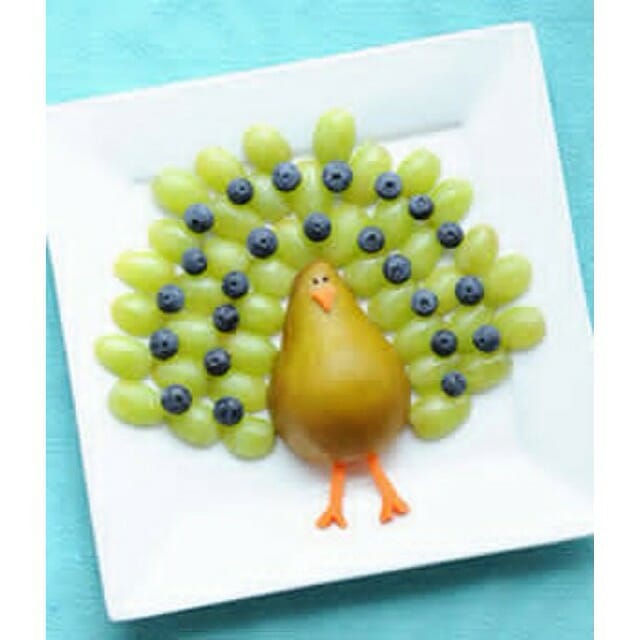 Pears are also a good source of iodine which helps to keep the metabolism balanced and the thyroid functioning properly and they are high in pectin which is highly beneficial for digestion and bowel regularity.

Allow pears to fully ripen at room temperature before eating for maximum nutritional and health benefits.

Recent studies have shown that the skin of pears contains at least three to four times as many phenolic phytonutrients as the flesh.

These phytonutrients include antioxidant, anti-inflammatory flavonoids, and potentially anti-cancer phytonutrients like cinnamic acids. The skin of the pear has also been show to contain about half of the pear’s total dietary fiber. 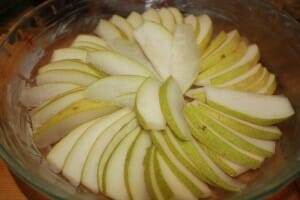 Fresh pears are delicious eaten as is after gently washing the skin by running it under cool water and patting it dry.

Since their skin provides about half of the pear’s total dietary fiber as well as its antioxidant and anti-inflammatory phytonutrients, it is best to not peel the fruit but eat the entire pear. 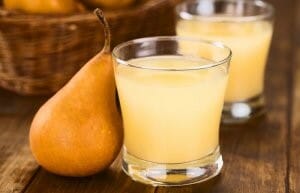 Scientists have now proven that when the pear pulp is removed, pear juices were determined to lose up to 40% of their total phenolic phytonutrients, and to have significantly reduced antioxidant capacity.

Many practitioners recommend that pear be one of the first fruits considered when it comes time to introducing an infant to his or her first pureed fruits as it is easily digested.

Combine pears with mustard greens, watercress, leeks and walnuts for a delicious salad. Serve pears with goat or blue cheese for a delightful dessert. 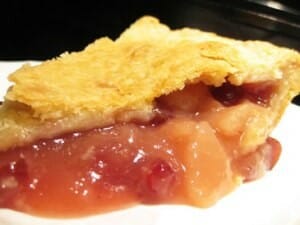 Pears can be made in to pies, (pear & cranberry pie in photo!),  pastries, jams, breads and desserts, core pears, and poach in apple juice or wine.

Pears can be grown in a wide range of soils. Pear trees are also easy to make fit in small yard spaces, making them a good choice for gardeners who crave fresh fruit. 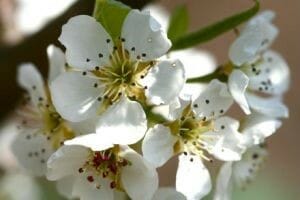 Plan to plant at least two varieties of pear trees because they need to be cross-pollinated to produce fruit.

Make sure the varieties are compatible with each other.

Plant in any fertile, well-drained soil in full sun in a place with good air circulation in the winter or early spring. 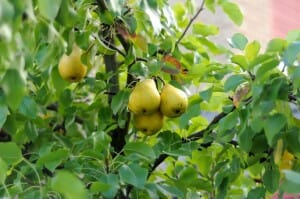 For container-grown trees, remove the plant from its pot and remove any circling roots by laying the root ball on its side and using shears to cut through the roots.

Water the young trees well during dry spells to help establish the roots. 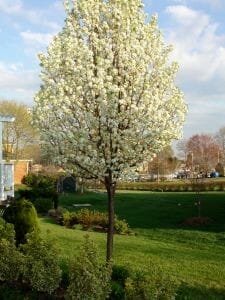 Apply a small amount of fertilizer early in the year. Add ⅛ pound of ammonium nitrate per tree multiplied by the number of years the tree has been set in moderately fertile soil. If you have highly fertile soil, use less fertilizer.

If the leaves are pale green or yellowish during the summer, use a little more fertilizer the next year. Harvest pears when they are mature but still hard. Ripen the pears at room temperature for the best quality.