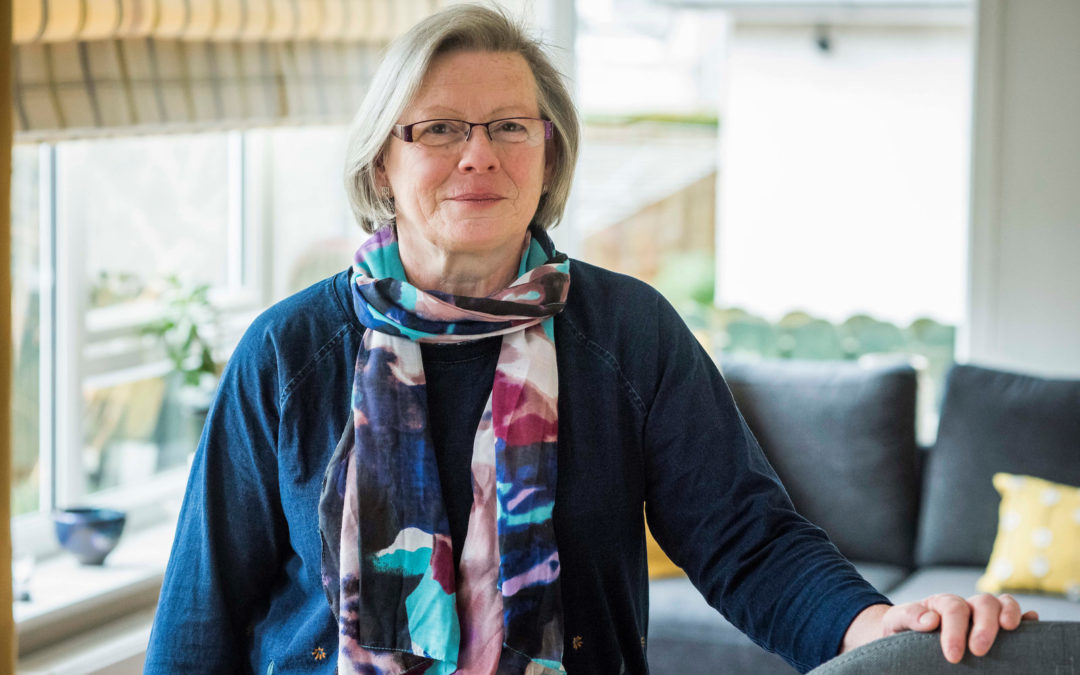 For most of her life, Joy Milne had a superpower that she was totally oblivious to. She simply had no idea she possessed an utterly amazing, slightly terrifying biological gift that scientists would itch to study.

In fact, Joy probably would have stayed oblivious if it hadn’t been for her husband, Les Milne.

The two met in high school. Les was a 17-year-old swimmer and Joy was 16, a new transfer. She remembers dancing with him at a party and being struck by his wonderful smell. “He had a lovely male musk smell. He really did,” she recalls.

Everything about Les appealed to Joy. He was very thoughtful and generally quiet but had a wicked sense of humor.

After college, they got married and set off on happily-ever-after. Les became a doctor, Joy became a nurse, and they had three boys. Joy says that as a couple they were so easy together — they rarely fought: “We disagreed about things now and again, but we didn’t fight, fight.”

Life with “her Les,” as she calls him, was everything Joy had hoped.

But then one day, about 10 years into the marriage, when Les was 31, he came home, and strangely, Joy says, he smelled different. “His lovely male musk smell had got this overpowering sort of nasty yeast smell,” she says.

At first Joy thought it must be something from the hospital where he worked and told him to shower, but that didn’t help, and over the weeks and months that followed the smell just seemed to grow stronger.

So Joy started nagging: “[I] kept saying to him … ‘Look, you know, you’re not washing enough.’ “But the smell wouldn’t yield, and eventually Les got mad whenever Joy told him to shower. He couldn’t smell it, he grumbled, and neither could anyone else. “He just would stomp off in a huff and say, ‘Oh, stop going on about that!’ I had to just let it go and put up with it,” she recalls.

Unfortunately, as the years peeled on, Joy began to feel that it wasn’t just her husband’s smell that was changing.

“It was his personality, his character. He began to change. He was more moody. He wasn’t as tolerant,” she says.

They fought more and more. So many of the qualities Joy valued in her husband — his thoughtfulness, his patience, his quiet dignity — began to bleed away until eventually, by his early 40s, she began to see Les as a totally different person.

And then one night Joy woke up to her husband attacking her.

“He was sort of screaming and shaking me and you know, but he was totally oblivious of it,” she says.

Les was clearly having a nightmare, but after the attack Joy put her foot down. She was worried Les had a brain tumor — they needed to seek medical attention. She remembers sitting next to Les in a sterile office as the doctor delivered his diagnosis: Her 45-year-old husband had Parkinson’s disease.

The discovery: an unusual sense of smell

Joy says that over the next 20 years she and Les tried to make the best of things, but it was difficult: the loss of movement, the loss of work, the slow narrowing of their world. Still, they struggled through. Then about seven years ago, they decided to attend a support group for people suffering from Parkinson’s.

“We were late. … A lot of people were there. And I walked into the room and I thought, ‘SMELL!’ ” she says.

Joy realized that the other people in the room had the same greasy, musty smell that Les had — the smell that Joy had first noticed when Les was just 31. “And then I realized for some people it smelled stronger and for other people it didn’t smell so strong,” she says.

Could it be, Joy wondered, that Parkinson’s has a smell?

As they drove home from the meeting, Joy kept puzzling it over in her head, and by the time they arrived, she’d decided she would tell her husband.

She says once she made her discovery clear, his eyes widened: “He’s a doctor — we both understood the significance. Immediately.”

To begin, this was a new scientific discovery, but also, Joy had smelled the disease on Les more than a decade before his symptoms got severe enough for them to seek medical help. If Joy could predict Parkinson’s before its well-known symptoms, such as shaking and sleep disruption, even started to appear, maybe she could work with researchers. It might lead to a breakthrough.

Joy and Les knew instantly they had to get this information to the right scientist. So they went to see a Parkinson’s researcher at the University of Edinburgh named Tilo Kunath. But initially, he says, he wasn’t interested.

“I just dismissed it, I have to say. It just didn’t seem possible,” he says. “Why should Parkinson’s have an odor? You wouldn’t normally think neurodegenerative conditions such as Parkinson’s, or Alzheimer’s, would have an odor.”

But then several months later, Kunath heard about research that showed dogs could smell cancer — which of course made him think back to Joy. So he tracked her down and asked her to come to his lab for a special test he devised himself.

Then Kunath gave the T-shirts to Joy to smell. “They were all given randomized numbers and put in a box, and then she was asked to take each one out and give it a score,” he says.

“And she was incredibly accurate,” Kunath says.

In fact, out of all the samples, Joy made only one mistake. She identified a man in the control group, the group without Parkinson’s, as having the disease. But many months later, Kunath says, that man actually approached him at an event and said, “Tilo, you’re going to have to put me in the Parkinson’s pile because I’ve just been diagnosed.”

It was incontrovertible: Joy not only could smell Parkinson’s but could smell it even in the absence of its typical medical presentation.

Kunath and fellow scientists published their work in ACS Central Science in March 2019, listing Joy as a co-author. Their research identified certain specific compounds that may contribute to the smell that Joy noticed on her husband and other Parkinson’s patients.

Working toward a diagnostic

Joy and her super smelling abilities have opened up a whole new realm of research, Kunath says. Researchers, including Perdita Barran at the University of Manchester, led a second, larger study and have recently found 10 compounds linked to Parkinson’s by using mass spectrometry and other techniques to analyze samples from 274 people. They’re hoping to find a way to diagnose Parkinson’s from skin-based biomarkers, according to Barran. More work is soon to come, she adds. 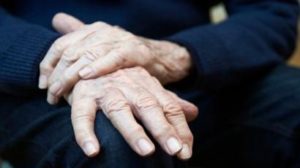 That’s the ultimate goal, Kunath says: to develop a new tool to detect Parkinson’s early. “We really want to know what is behind this and what are the molecules. And then can the molecules be used as some sort of diagnostic test?”

Parkinson’s begins slowly, taking years or maybe even decades before symptoms such as tremors appear, Kunath says. “Imagine a society where you could detect such a devastating condition before it’s causing problems and then prevent the problems from even occurring,” he adds. Combined with potential therapies to prevent or mitigate Parkinson’s, a molecular test that identified Parkinson’s would be a powerful tool.

There’s some evidence — and history — around the idea of scent signaling the presence of a disease, says Richard Doty, the director of the Smell and Taste Center at the University of Pennsylvania’s Perelman School of Medicine. “It used to be that physicians did use breath odor and other odors to signify certain disorders. But that’s not really invoked presently, because we have so much better ways of [diagnosing] things.” He also says that smell is an imperfect biomarker because confounding factors could influence people’s odors, such as diet and age.

“This idea of an olfactory biomarker [for a disease] is fascinating,” said Dr. Thomas Hummel of the Technical University of Dresden’s Smell & Taste Clinic, via email. But there remain “numerous open questions.”

Joy’s smell test for Parkinson’s is “interesting but not definitive,” Doty adds. More studies would lend it more certainty, and he says, “I think it’s still up in the air.”

But Joy’s superpower is so unusual that researchers all over the world have started working with her and have discovered that she can identify several kinds of illnesses — tuberculosis, Alzheimer’s disease, cancer and diabetes.

Sharing their story — for science

As for her life with Les, Joy says, once it became clear that she might hold in her nose a tool that could move research on Parkinson’s forward, Les had a eureka moment: They had more knowledge to offer science. Joy had smelled his Parkinson’s more than a decade before diagnosis, so maybe, Les told Joy, if they thought very carefully about their life together before the official diagnosis, they’d be able to pinpoint early symptoms that hadn’t yet been identified by science.

“We had to write down everything that had happened, so that medicine would understand what was happening to people with Parkinson’s,” Joy says.

So for the last six weeks of his life, Les and Joy sat for daily writing sessions. “They would only last 35 to 40 minutes at a time, but the last six weeks were completely different,” she recalls. “We spent time each day discussing what happened to us over the last 20-odd years.”

Joy says Les had always shied away from talking about his Parkinson’s. It seemed like it was so existentially threatening to him — this terrible dread DISEASE — that he just had to shove it away and couldn’t acknowledge it. But he was freed by their discussions.

In fact, Joy says the research she’s doing with her nose was the last thing they ever spoke about. ” He said, ‘You won’t let this go — you will do it, won’t you? You promise?’ ” she recalls. Just a few hours later, he died. But Joy has stayed true. “I’ve done it. I’ve kept my promise. So it should make an awful lot of difference.”

This story comes from an episode of Invisibilia‘s Season 6. Listen here for the full story.

{There are many people who can detect illnesses through smell, and it is not as unusual as one might think. I was in a group of nurseswhen one turned to me and said I smelled of Strep Throat. She was right! People learn to identify certain smells and those that link to some disease too. Funny thing is the word ‘Diagnose’ has ‘nose’ in it ! ~ ct}