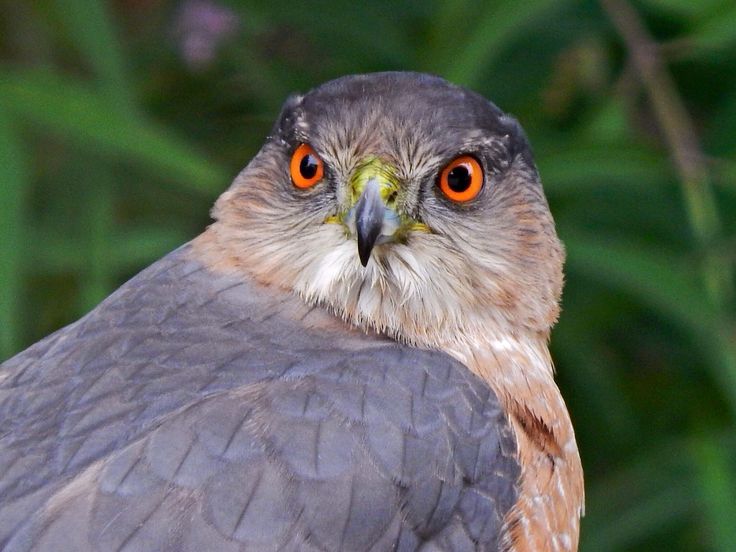 One of my familiars, Hawk guiding me throughout life. Hawk as a spirit guide.

When I speak of hawk I refer to the entire family of Hawk as one. Even when one hawk comes to me, it is always known throughout the whole hawk family. This is the way animals are for the most part. They are one consciousness; it is beyond telepathy as it is just knowing in a collective.

Animals as familiars or power animals gift you with inclusion in to their clan and thus you can gain their abilities for your own use.

Hawk has come around to gift me with many things for some time and I share here what Hawk can mean in a general knowledge. AS when you connect to Hawk, the flow back to you may include some of these strengths.

Hawk represents a messenger in the Native American culture and will shows up in our life when we need to pay attention to the subtle messages found around us, and from those we come into contact with. The presence of hawk means ‘pay attention’.

“In many traditions, hawks are sacred: Apollo’s messengers for the Greeks, sun symbols for the ancient Egyptians and, in the case of the Lakota Sioux, embodiments of clear vision, speed and single-minded dedication.” ~ John Burnside 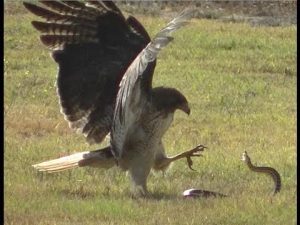 Observing the hawk in its natural habitat, we see the hawk has tremendous vision.  Their eyesight is phenomenal; able to spot s running mouse or lizard, so it is a key factor in their incredible hunting abilities.  Hawk is a message for us to keep our eyes (both physical & spiritual) keen on the areas that present themselves in our life.

Watching Hawk, we derive the essence of power, energy and intensity and appreciation. Consider its powerful beak and impressive talons, steely stare and intense focus contribute to the hawk’s aura of power.

One trait all hawks share, is the ability to move between the seen and unseen realms gracefully, joining both worlds together. Their acute vision attributes this ability, their discriminating nature keeps them out of dangers path. Hawks have a broad vision, allowing them to see what the future holds.

Hawk denotes union with All That Is. The hawk is a bird of the heavens, arranging the changes necessary to prompt our spiritual growth. Having this power animal can be bitter sweet. When accepting its presence in your life, you will be asked to surrender/give up anything that doesn’t honor the integrity of all life.

Hawk raises its family with both male and female in attendance while the young is learning. 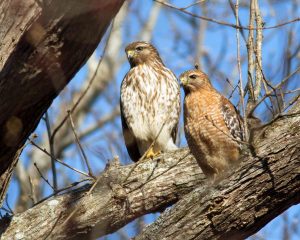 The strength of the Hawk is depicted as the Guardian and Protector of the Earth Mother and all her children. Hawks are the protectors and visionaries of the Air

. The cry of a Hawk in meditation is a warning of upcoming situations that will require boldness and decisiveness. Courage, defense, wisdom, illumination, new life, creativity, truth, experience. Getting a larger overview so you can make a better decision. Warnings of danger.

Hawk spirit animals belong to the realm of bird medicine. It carries the symbolism that comes with the ability to fly and reach the skies. The hawk can soar high and reach the heavens effortlessly, much like the eagle.

The hawk is also a bird of prey. Having this animal as a spirit guide emphasizes your ability to lead and influence others. When the hawk is present in your life, it could signify that it’s time to take more initiative and being active.

Hawks symbolize the power of observation. This spirit animal’s guidance may also indicate that you have the opportunity to study a situation before taking action. Observe the situation and then act when the time is right.

Hawk people may have a tendency, because of their vast ability to see clear through to the heart of things, to become arrogant and this should be avoided because it keeps them earthbound as well as turning other people off. Often this starts as confusion on the part of the Hawk person who cannot understand why others seem unable to be as aware of the larger picture and their own issues and projections.

Because of the strong energy, the intensified life-force, activated by Hawk, any individual with it must be careful in how they express themselves. There will unfold within you the ability to tear the heads off any snakes in your life, or anyone or anything seen as an enemy. Your comments and actions will be like the hawk’s beak and talons–strong and powerful, but with a capability to harm, to tear and destroy connections. 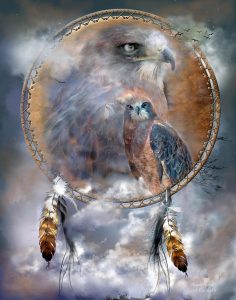 One of the greatest gifts a Hawk medicine person can give the world is their visions of a better and brighter future. Visionaries are always ahead of their time and it’s not easy seeing what others are not ready to see. Often these people are not honored and recognized for their work and efforts until long after they have crossed over.

Hawk Medicine people are aware of omens, messages from the spirit, and the color of the calling card you gave to them three months ago. No detail slips by them unnoticed.

To the Pueblo, the Red-tailed Hawk was known as Red Eagle. Its feathers and energies were used in healing ceremonies and for bringing the rains and waters necessary for life. 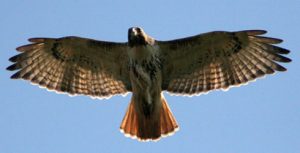 To the Ojibwa, the red-tailed hawk represented leadership, deliberation and foresight. “Hawk is akin to Mercury, the messenger of the gods. Hawk medicine teaches you to be observant…Life is sending you signals.” The red-tail can spread its wings to a great width, and it can teach you to use your creative energies in the same way. It can extend the vision of your life.

If you look closely at the tail of a Red-tail Hawk, you will see a thin black horizontal line running across the base of the feathers with each feather tipped by white.

Red-tail Hawks are divine messengers meant to bring guidance from the heavens and ground the guidance out in the physical world. In grounding out the guidance (black line) the realms of spirit (white tip) are available even in the lowest, most mundane places. Many of a red-tail’s feathers are “barred” with multiple dark lines. This is a common feature of hawk feathers and speaks to how they are able to navigate multiple altitudes and embody many layers of understanding. 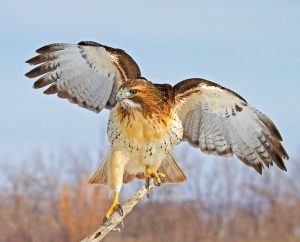 In the Egyptian Tradition Hawk was associated with Magic and shapeshifting. Isis is said to have shapeshifted into a Hawk to save Osiris. Horus also carried Hawk medicine which allowed him to see the “unseeable”.

For the Greeks, the hawk and the eagle were associated with the god Jupiter, king of the gods.

In Celtic oral tradition, the Hawk of Achill is listed as the oldest creature in the world. The Celts considered the hawk to be a messenger between the Otherworlds and this existence. In magic, they said it had greater skill and strength than any of the other birds.

According to the Greek writer Homer, hawk was one of the messengers of Apollo because of its swiftness. Both the hawk and falcon were associated with the goddess Circe. Although the hawk was usually associated with the Sun, a very early statue from the temple of the Moon goddess Artemis shows a priestess with a hawk on her head.

In one of the legends of India, the hawk Gayathri brought soma from heaven for the gods. In the Rig Veda, the Sun is often compared to a hawk. Indra sometimes rode on a hawk.

In Persian Zoroastrianism, the hawk was connected with Ahura Mazda, god of light, and Mithras, the Sun god.

Often I will see Hawk while traveling and he has given me many messages throughout time. They were never wrong. I always pay attention to Hawk. Sometimes it is purely a message of Hello.

Once while leaving Arkasas, driving back to Texas with my son, I saw nearly 100 Hawks each sitting on a post while we drove through some marshy area. They were spread out over many miles and I was so delighted. No messages, just observation of their beauty. My son was rolling his eyes while I gasped at nearly every one!