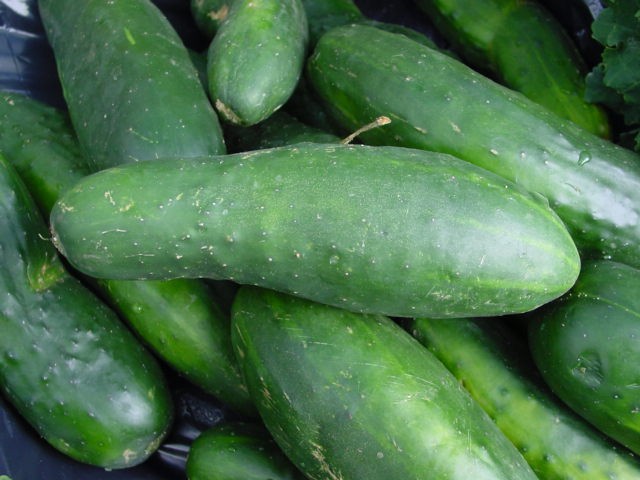 Cucumbers are scientifically known as Cucumis sativus and belong to the same plant family as squash, pumpkin, and watermelon.

Like watermelon, cucumbers are made up of mostly (95 percent) water, which means eating them on a hot summer day can help you stay hydrated. 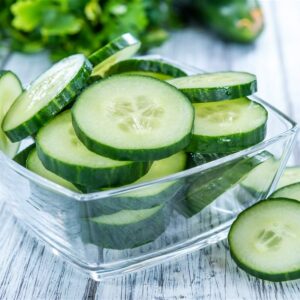 Cucumber is an excellent source of silica, which is known to help promotes joint health by strengthening the connective tissues.

When mixed with carrot juice, they can relieve gout and arthritis pain by lowering the uric acid levels.

Cucumber are known to contain lariciresinol, pinoresinol, and secoisolariciresinol.These three lignans have a strong history of research in connection with reduced risk of several cancer types, including breast cancer, ovarian cancer, uterine cancer and prostate cancer.

Cucumbers contain an anti-inflammatory flavonol called fisetin that appears to play an important role in your brain health.

Cucumber extract helps reduce unwanted inflammation, in part by inhibiting the activity of pro-inflammatory enzymes (including cyclo-oxygenase 2, or COX-2). 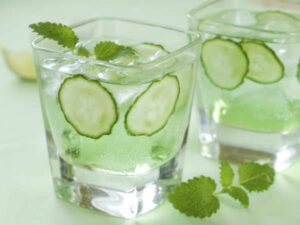 Cucumber juice contains a hormone which is needed by the cells of the pancreas for producing insulin which has been found to be beneficial to diabetic patients.

Cucumbers are low in calories and high in fiber, which makes them useful for both weight loss and digestive health.

Placing a cucumber slice on the roof of your mouth may help to rid your mouth of odor-causing bacteria.

According to the principles of Ayurveda, eating cucumbers may also help to release excess heat in your stomach, which is said to be a primary cause of bad breath.

The skin of cucumbers can be used for skin irritations and sunburns as aloe would be used. 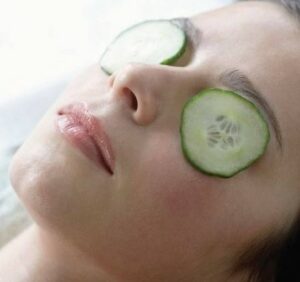 Place a slice over puffy eyes and its anti-inflammatory properties help reduce puffiness. The silicon and sulfur in cucumbers help to stimulate hair growth.

Buy organic cucumbers as they are sprayed with pesticides and often coated with wax or grow your own. Fresh, cleaned cucumbers may be enjoyed as they are without any additions.

Cut in to cucumber cubes are a great addition to vegetable/fruit salads.

Indian yellow curry-cucumber (dosakayi) is used widely in a variety of curry, and stew preparations in south India with added buttermilk and yogurt.

Make some Cucumber Water; thinly slice up half a cucumber and drop the slices into a pitcher of ice water and stir.

You could add some fresh mint leaves or a bit of fresh citrus, or simply enjoy as is. It is a tremendous way to cool down and hydrate.

Roll up your favorite things in to thinly sliced cucumbers like hummus, veggies, even turkey.

Pickling cucumbers include all varieties that are cultivated not for consumption in fresh form, but for processing into pickles.

Cucumbers are a warm-season vegetable planted outside in the ground no earlier than 2 weeks after last spring frost date. 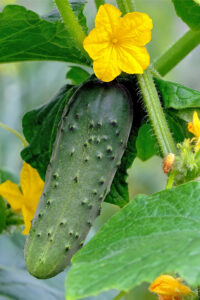 Most varieties will grow in any amount of space, thanks to the plant’s ability to climb. The most common varieties of slicing cucumbers have sprawling vines with large green leaves and curling tendrils.

The growth of these plants is fast, and the crop yield is abundant if you care for them properly. They need a site with full sun.

Cucumbers are seeded or transplanted outside in the ground no earlier than 2 weeks after last frost date. Cucumbers are extremely susceptible to frost damage; the soil must be at least 65ºF for germination. Do not plant outside too soon!

Soil should be neutral or slightly alkaline with a pH of 7.0. Improve clay soil by adding organic matter. Improve dense, heavy soili by adding peat, compost or rotted manure.  Light, sandy soils are preferred for northern gardens, as they warm quickly in the spring.

Harvest regular slicing cucumbers when they about 6 to 8 inches long (slicing varieties).

Cucumbers are best picked before they seeds become hard and are eaten when immature. Do not let them get yellow. A cucumber is of highest quality when it is uniformly green, firm and crisp. 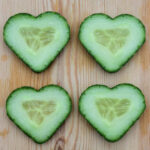