An Angel for My Father’s Transition by Carolyn Thompson

It was time for my father to die. He was 87 and worked hard throughout his life and now it was time for his transition. We went to doctors who said nothing as they could see my father was getting ready to die. There are clear indications when old age just comes to its end.

X-rays showed that my father had worn out some of his organs and so it was just a matter of time. I had seen the images but did not tell my sisters and brother as it adds to their grief. My job was just to make my dad comfortable.

My dad lived a long adventurous life, from being the 12th child in his family in Georgia to his final job as a Hospital Administrator.

In between, he put himself through college by growing sweet potatoes and majored in pharmacy; he was the only child in his large family that went to college.

He served in the U.S. Navy through WWII and even flew blimps. He put in 25 years in the Navy then worked in civil service until he retired.

With his service in the Navy, we all traveled the world together and lived in some wonderful towns. He was a wise man and strong leader that many depended upon in his later years.

Retired as a Navy Commander and retired from additional years as Hospital Administrator in civil service, he could look over his family of four children and be proud of his accomplishments of putting all of us through college. All his children were doing very well in their lives with mates and children too. He had guided us all very well.

To Die is a Natural Transition

As he became more ill, he kept the depth of his feeling sick a secret from us as much as he could. He really wanted to have his final days at home. He did not want to be in the hospital and all their invasive methods for trying to prolong life. Being 87 was long enough for him!

Once when Mom and I took him to the doctors, he made both of us swear not to tell the doctor of his past occupation of Hospital Administrator. So there we sat with lips tight as he made the doctor jump through hoops, testing the doctor’s know-how.

Yet it was visible his heart was also tired, as his feet were swollen and not from lymph buildup. The doctor wrote up a prescription  and we drove to get it filled. My mother went in to fill it.

With my mother gone, my father turned to me and asked what I thought happened at death. So I told him what I understood, from reading, conversations with others and my own two near death experiences.

I told him that his spiritual essence/soul slips out of the body and will be met by family members who have died, like his brother Mark, and Celestial beings. I told him there really is no real death other than the body, that we live on and that the other side is much nicer than here.

He seemed to take that in, and then added “even the pope does not know what happens after death”; which I took as his way of closing the conversation and, just in time, for my mother was opening the car door.

He was the kind of man who did not want to let me think I said anything right. But I could see he was concerned and focused on his own death.

A Man of Knowledge

My dad and I had discussed the metaphysical nature of life throughout time, yet he always took the opposition side. It makes for great debates. In the war, he managed a group of soldiers. He said there would be one man who claimed he would never come out alive and he died, and another man would talk about going home, and he did. To my dad this was more than coincidence and yet he could not put his finger on what.

He helped me greatly when I started doing Energy Medicine full-time by guiding me on how to talk about it and work within the strict guidelines of the medical field. He was instrumental in polishing my professionalism.

My mother could never even approach these subjects without flipping out and getting mad; she majored in psychology and so anything of this nature was lunacy, a sign of her times.

So on this day, I had to smile as I know he was thinking about what I said about death and transitions. He was preparing himself.

A week later he was in ICU, in an altered mind and agitated state. He was grabbing at the IV, ready to pull it out, and I had to remind him where he was and why. It took some time to relax him enough and lay still. Then he would pull at it again. He was unable to rest. The nurse came in and sedated him and fixed his IV as it was now leaking.

I sat down in the chair next to his bed and started my prayers for my father, “no pain and easy release” as I have done many times for others. I sat for a while, remembering my father in other instances and how he had been a rock for me. Even far away, his words of advice would guide in difficult situations. 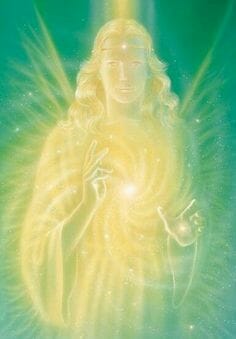 I looked up at my father as he was holding out his arms upward and had open hands, like reaching for something.

As I looked out to where his hand were posed with my clairvoyance I could see this 12 foot angel at the end of his bed.

This angel was shimmering white, silvery, gold lights and no wings, as the angle was more of an oscillating field of energy.  My father was reaching for him.

I asked the angel telepathicaly , “Why are you here”, and the angel replied “To calm him down”. The Angels light was flowing into my father and he relaxed. I could sense this angel would stay with my father until time for transition. My father was ready.

As my father was finally sleeping, I went out to see my brother as we were here to keep watch. The doctor came telling us that someone should spend the night with my father here at the hospital, and so we decided my mother should spent the night in his room. The doctor knew his time was close but never voiced it.

That night my father made his transition and my mother woke up for it. Being there gave her closure and a peace.

Although he is missed, we all feel he had a life well-lived and served so many people with his guidance. Life goes on.